Actinic Keratosis skin lesions are among the most commonly encountered skin lesions in dermatology. Nearly 58 million Americans are affected by these pre-cancerous lesions each year. AKs have been characterized as “precancerous” secondary to the observation of atypical cells confined to the top layer of the skin (epidermis). Learn about AKs and what you (and your dermatologist) can do about them! 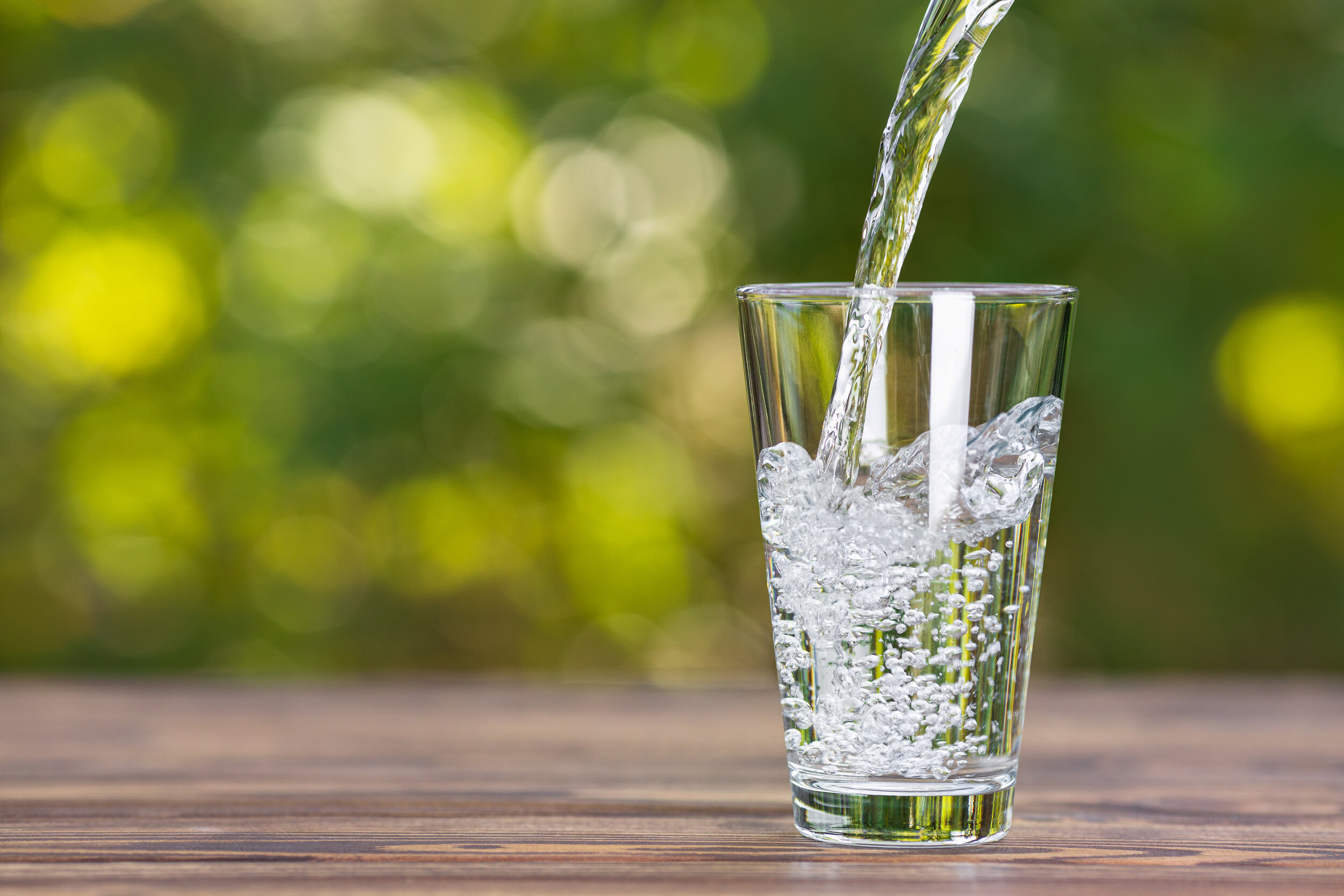 You may not have received a significant sunburn over the years or even remember getting a bad sunburn as a child, but you must understand that these skin cancers are not directly related to recent sunburns. Rather, they are related to the accumulation of UV-exposure over many decades. Think of this concept by imagining an empty drinking glass being filled up with water. Each time you venture outside during the day, several drops fill the glass. The amusement park that you were at for 10 hours on that hot July day, a small pour of water fills the glass. The blistering sunburn that you received at age 5, a large pour of water fills the glass. The many years of tanning bed use, a very large pour of water fills the glass. At this point, is the glass of water full? Well, that is the question we are trying to figure out. The exact size of your drinking glass depends on your skin’s ability to protect and repair the UV-induced damage. This also depends on what precautions you have taken to protect your skin from the sun, including the use of sunscreen, seeking shade, and wearing sun-protective clothing. According to a study by Godar et al., individuals aged 19-40 have an average lifetime accumulated UV-exposure of 47%, while ages 41-59 have a total lifetime accumulated UV-exposure of 74%. This data demonstrates that if good sun protection practices are initiated at an early age, the total accumulated UV-exposure will slow and be significantly less than the average US citizen in comparison. 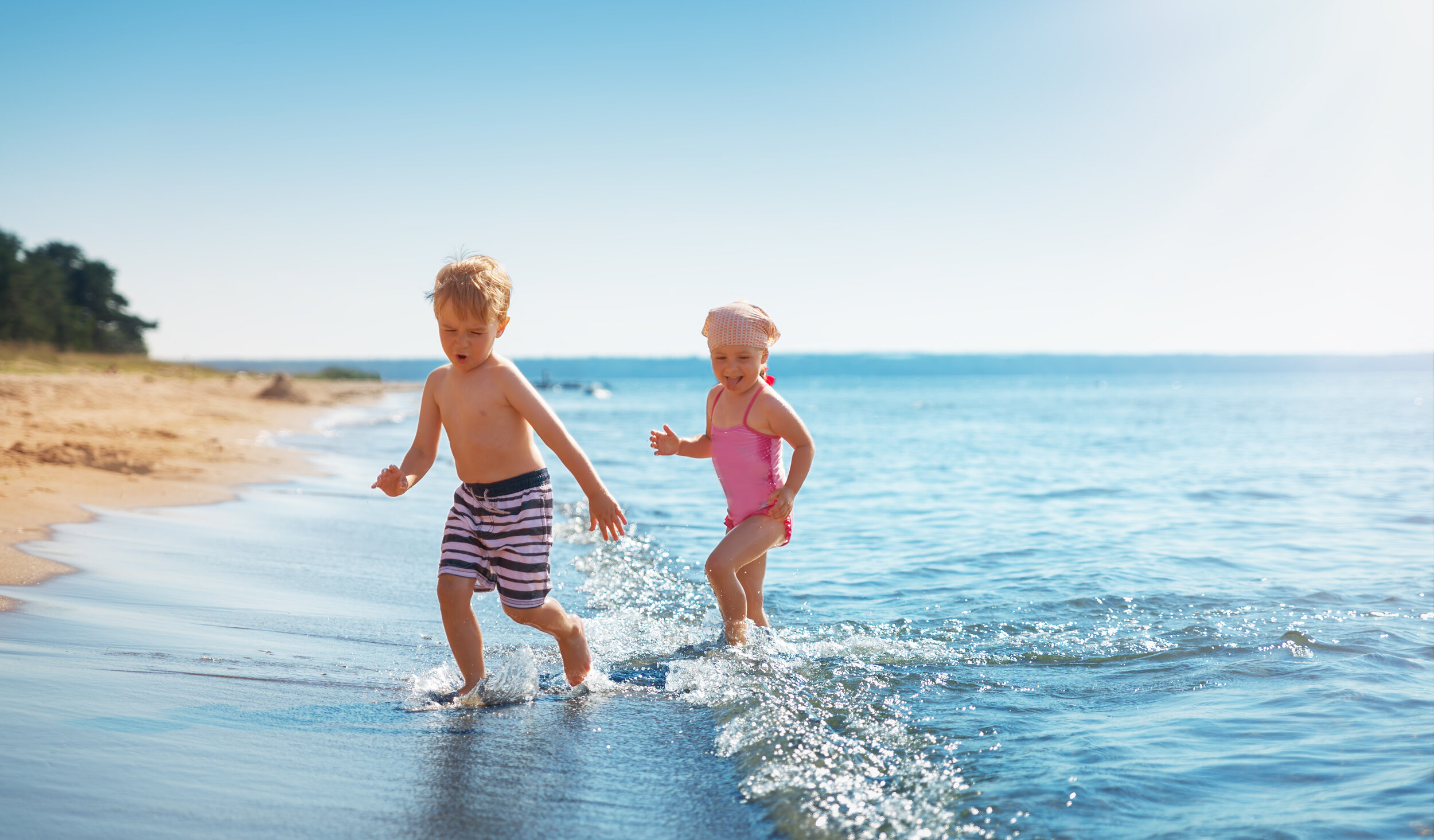 The main reason the above background information is so important pertains to the increased development of pre-cancerous skin lesions known as actinic keratosis (AK). AKs are among the most commonly encountered skin lesions in dermatology. Nearly 58 million Americans are affected by these pre-cancerous lesions each year. AKs have been characterized as “precancerous” secondary to the observation of atypical cells confined to the top layer of the skin (epidermis). Actinic keratosis poses no risk of distant spread as long as they have not transformed into an invasive SCC. It is estimated that AK transformation into an SCC occurs at a rate of 1-10%. Actinic keratosis often appears on the sun-exposed skin such as the scalp, face, neck, chest/back, and arms. Those individuals with lighter skin complexion and a history of significant cumulative sun-exposure are at higher risk for developing an SCC. 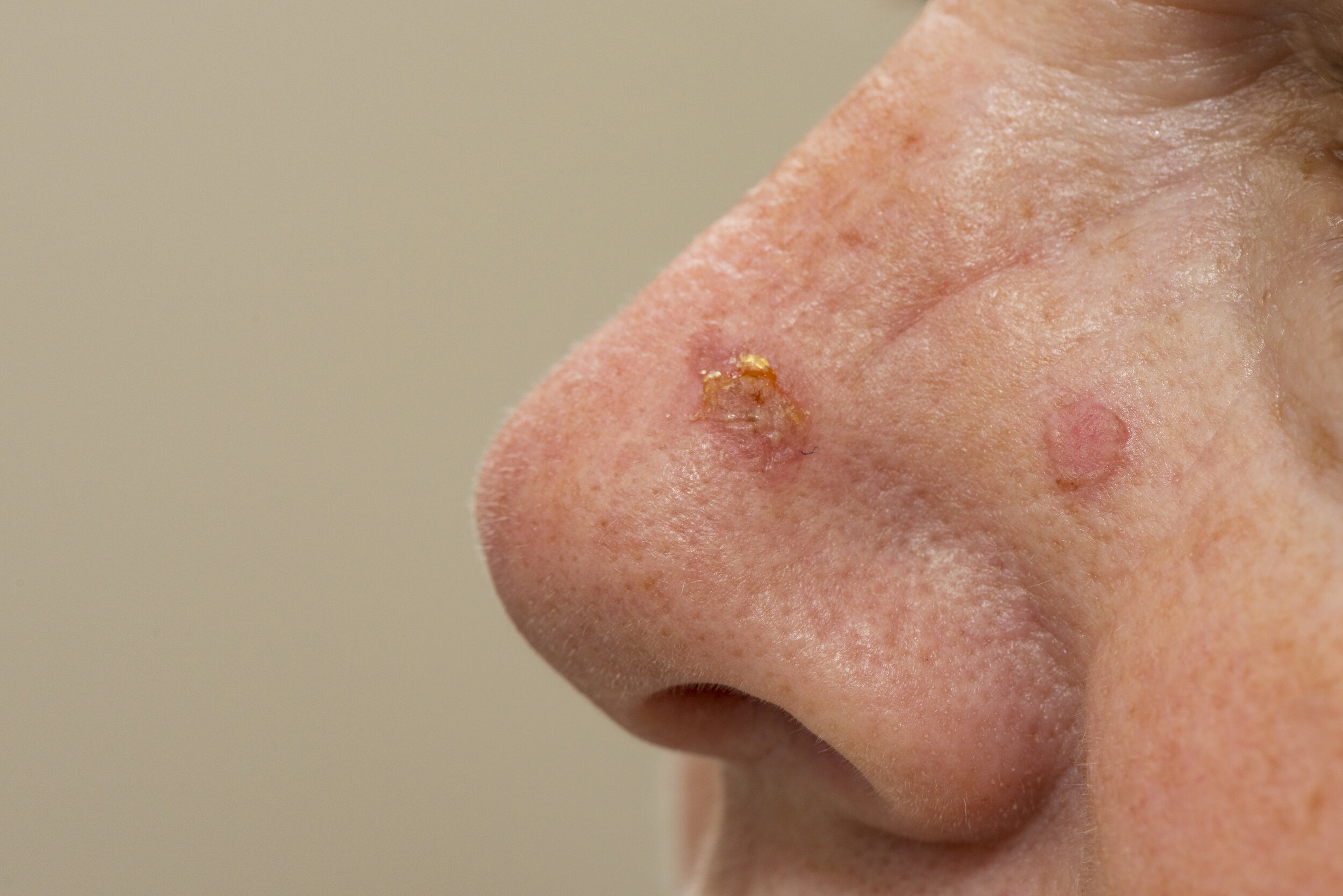 AKs typically present as small red to brown, rough scaly spots with indistinct borders on sun-exposed skin. The overlying texture of AKs is often likened to the texture of sandpaper. AKs are commonly felt on the surface of the skin prior to being clinically seen. Oftentimes, AKs are present on a background of dark spots and small blood vessels, called poikiloderma. These associated findings often act as proof to a history of significant sun exposure over the years. Individuals who have multiple AKs tend to develop many more over the years and may be good candidates for a treatment that will be discussed below, termed “field therapy”. Although the sun damage has already been done, development can be slowed and the numerous treatment options can decrease the risk of transformation into an SCC. It is essential to wear a broad-spectrum SPF sunscreen daily to help prevent further UV-induced skin cell damage.

What Are The Treatment Options? 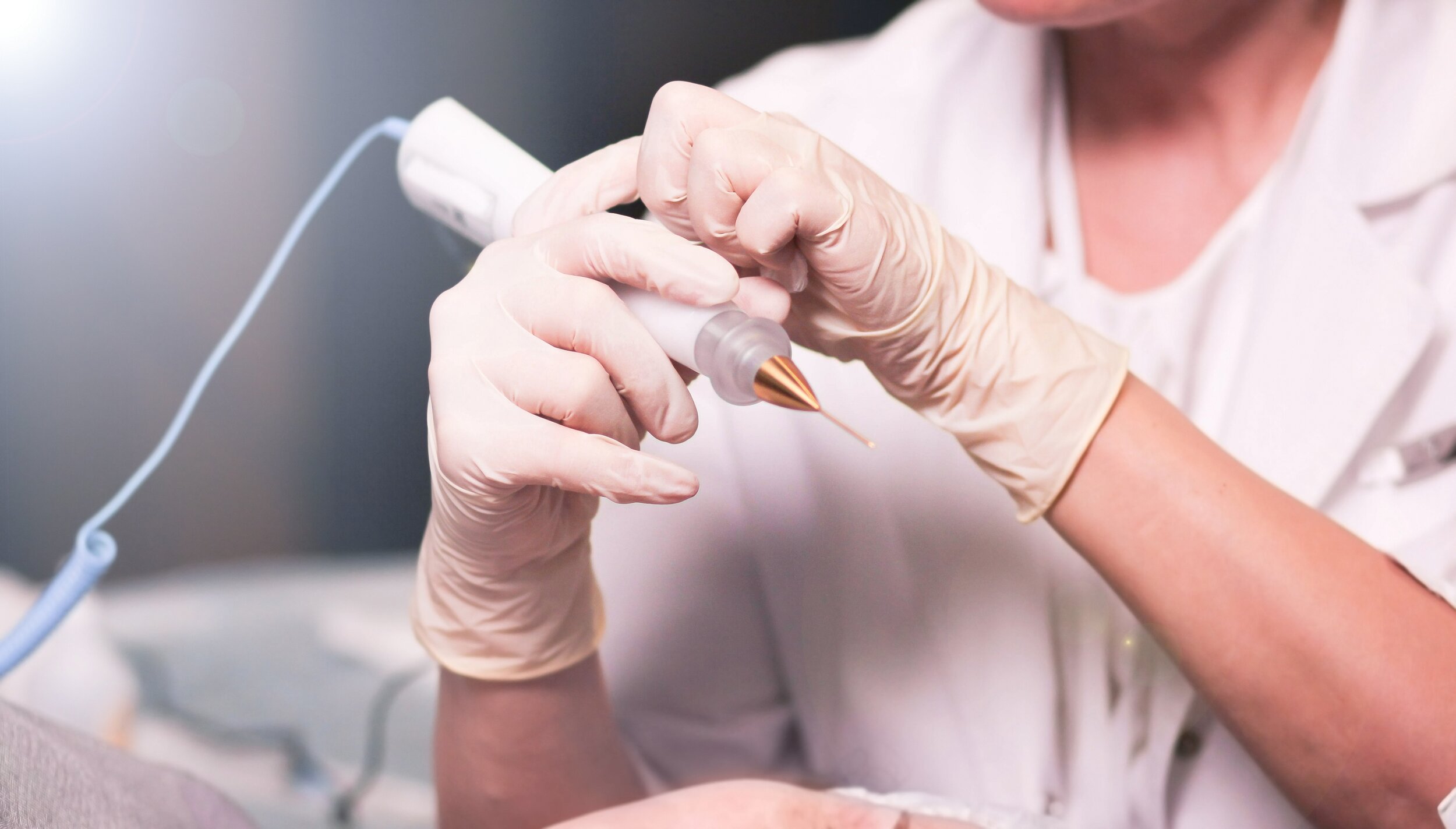 The treatment for AKs will vary depending on the number that are present and the lesion thickness. Those who have less than 15 AKs can be easily treated with a procedure called cryotherapy. Cryotherapy uses liquid nitrogen at a temperature of -321 degrees Fahrenheit (-196 Celcius) to freeze the atypical cells. This leads to complete destruction of the AK, allowing new skin cells to form underneath. At the site of the lesion, an ice-ball forms after treatment with liquid nitrogen, leading to cell rupture and destruction. Immediately following the procedure, the skin will appear red and swollen and over the course of several days, a small blister may form. A blister may form and the redness typically resolves over 7-10 days. However, this procedure does not repair any existing DNA damage caused by long-term UV-exposure. Those who have more than 15 AKs are better candidates for field therapy. Field therapy uses a topical chemotherapy or immunomodulator cream to treat a larger surface area, such as the entire face, arms, or chest. There are numerous medications on the market specifically for this purpose and will be described below.

These medications include generic imiquimod, Aldara, and Zyclara. They work by directly stimulating the body’s own immune system to destroy the abnormal skin cells in precancerous and cancerous lesions. This type of medication is not effective in those who are immunosuppressed or taking immunosuppressant medications. When used topically on the skin’s surface, it only targets the abnormal skin cells while leaving normal skin unaffected. The typical dosing regimen for these medications is topical application 2-3 times per week for up to 16 weeks for the treatment to be effective.

This medication is a nonsteroidal anti-inflammatory (NSAID) that works by inhibiting the production of new blood vessels and slowing the rate of cell growth. It has also been shown to cause cell death by tagging the atypical cells for destruction. This medication starves out atypical cells leading to programmed cell death, resulting in minimal inflammation. The typical dosing regimen is topical application 1-2 times daily for up to 90 days. The side effects are minimal with some application site redness, dryness, and itching.

This is a newer cytotoxic medication derived from a plant called Euphorbia peplus. This topical medication works by directly inducing cell death and increasing antibody-dependent cellular toxicity. Due to the short duration of treatment, this medication is ideal for those preferring to have shorter treatment times with the same results. The typical dosing regimen is the topical application for 2-3 days depending on the location.

When the above medications are used topically on the skin’s surface, they only target abnormal cells leaving the normal skin unaffected. Treatment often causes moderate to severe skin irritation, redness, and swelling in the location of the abnormal skin cells. This type of reaction is desired and demonstrates that the medication is working properly. Following treatment, redness and scaling are common and tend to fade over the course of 2-3 weeks. Approximately 1 month following treatment, your skin will feel much smoother with a significant improvement in the texture and appearance.

PDT is another modality used in the treatment of AKs. A topical photosensitizing medication is applied to the treatment area and allowed time to thoroughly absorb into the skin (incubation period of approximately 1-3 hours). This medication is absorbed in much higher concentrations in atypical and damaged cells. Following the incubation period, a blue light is applied to the skin causing activation of the photosensitizing medication. This reaction leads to the formation of molecules (reactive oxygen species) that are directly responsible for the cellular destruction. It is important to remember that following this treatment, sun exposure should be strictly avoided for at least 48 hours. The redness and scaling tend to fade over 1-2 weeks.

Not only are chemical peels good for skin rejuvenation, but rather a good treatment modality for precancerous lesions. There are a variety of chemical peel formulations available, but the most common type used in the treatment of AKs is trichloroacetic acid (TCA) and glycolic acid. Typically, a series of peels are often needed to achieve the result of the topical medications described above. Although chemical peels are not considered the first line for the treatment of AKs, they can be used prior to the application of the above medications for more effective results.

There is no easy way to empty our drinking glasses (UV-induced damage). However, we can start practicing ways of preventing further drops of water from filling our glass; decreasing the risk of developing an invasive skin cancer. This can be accomplished by practicing strict sun protection habits such as applying an SPF 30+ sunscreen, wearing sun protective clothing, and seeking shade during peak sunlight hours. It is vital to remember that sunscreen should be reapplied every 2 hours during prolonged sun exposure. Also, it is important to visit your dermatologist regularly for full-body skin exams. We possess the knowledge and tools to detect the early stages of pre-cancerous and cancerous skin lesions. This decision could potentially be the most important decision you make in life.

Find A Location Near You
Search
© 2022 Academic Alliance In Dermatology. All Rights Reserved | Healthcare Marketing by